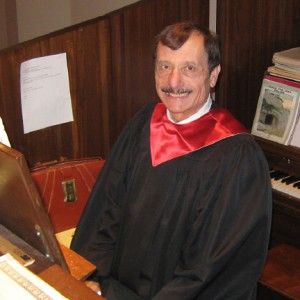 Fred began his tenure as Epworth’s organist on Palm Sunday, March 19, 1978. He holds a BA inFrench and Music from Juniata College in Huntingdon, PA, where he studied organ performance with Donald Johnson. While completing his doctoral studies in Romance Philology at the University of North Carolina in Chapel Hill, Fred also continued his organ studies with David Weadon, former associate chapel organist at Duke University and with organist/composer Robert Hebble, long time associate toVirgil Fox at Riverside Church in New York City. Fred’s work with Mr. Hebble included private instruction as well as participation in a Master Class in composition and improvisation at the Lake Junaluska Summer Music Camp. Fred became acquainted with Mr. Hebble through his friend and colleague Greg Jones, former Director of Music and the Arts at Epworth, who was instrumental in Fred’s hiring at Epworth. When not involved with the many aspects of the Music Ministries of the church, Fredenjoys traveling and spending time at home with his spouse and his canine companions.