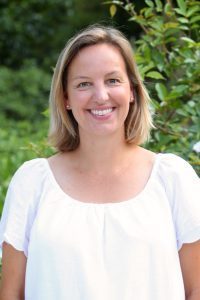 Leigh joined us as Preschool Director in July 2017. She moved to Durham in 2002 and started at Epworth Preschool as a parent in 2003. Leigh began teaching in the preschool in 2008. She graduated from UNC-CH in 1996 with a BA in Psychology. While her husband, Jeff, was in the Navy, Leigh received her Masters in Leadership of Teaching in 2001. She then worked in the Infants and Toddlers Early Intervention Program in both Maryland and North Carolina.

Leigh is Tar Heel born but spent most of her childhood in New Bern, NC. She and Jeff were thrilled to settle in the Durham/Chapel Hill area to raise their three children, Abby, Molly, and Will. When Leigh is not at Epworth, she enjoys spending time with her family. They love to go for family hikes but more often you can find Leigh on the sidelines of soccer games, watching tennis matches, on deck at swim meets, and cheering for the Tar Heels.